What Charles Dickens Teaches Us About Disability in His Christmas Novellas

Every December, my 7th grade students read A Christmas Carol. It's one of my favorite books I teach, there’s so much to learn and discuss and analyze from that book. This past weekend I decided to spend my Saturday morning with a cup of coffee and read another Christmas novella of Charles Dickens, titled A Cricket on the Hearth.

I think we all know the story of A Christmas Carol (1843), but A Cricket on the Hearth (1845) is not as common, about a rich, prideful toy merchant named Tackleton and his poor employee, the toymaker Caleb Plummer and his daughter, Bertha, who is blind (does this sound reminiscent of A Christmas Carol? Yep, but the rest of the story is very different, though I won’t focus on that).

Charles Dickens includes themes of wealth and poverty into all his stories, due to his background of having his father thrown into debtor’s prison, and so Dickens at age 12 dropped out of school to work in a factory to help pay off his father’s debts and to help provide for his family.

But while reading A Cricket on the Hearth, I couldn’t help but notice how Dickens included themes about disability that ran subtly throughout both A Christmas Carol with Tiny Tim, and in A Cricket on the Hearth with Bertha. It is believed that Charles Dickens himself had epilepsy, and his own nephew was sickly and would later die of tuberculosis, which led to the inspiration of Tiny Tim and other characters with disabilities in his stories and novellas. 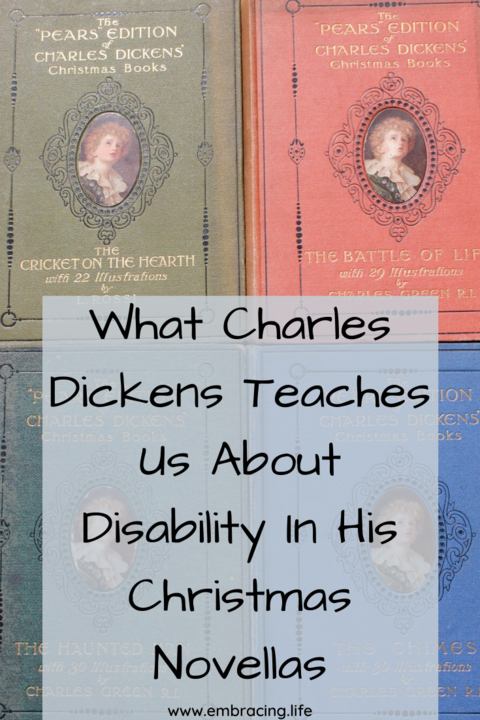 In A Christmas Carol, the Cratchitt family were always grateful for what they had. And they loved Tiny Tim for who he was. They didn’t treat him like he was broken and needed to be fixed. They knew what accommodations he needed (that good ol’ leg brace and crutch), and they enjoyed the life and the blessings they had. As a special needs parent myself, I find I can learn a lot from them. They weren’t focused on getting him endless therapies and supplements and diets to try and ‘fix’ him and make him fit in with society’s mold of what was ‘normal’. Possibly, because they couldn’t afford it beyond his brace and crutch, but even if they could, I don’t think that was the Cratchitt way. They didn’t view Tim as broken or less than. They loved Tiny Tim for who he was and they loved being around each other and counting their blessings and sharing their love with others and that was their mindset. 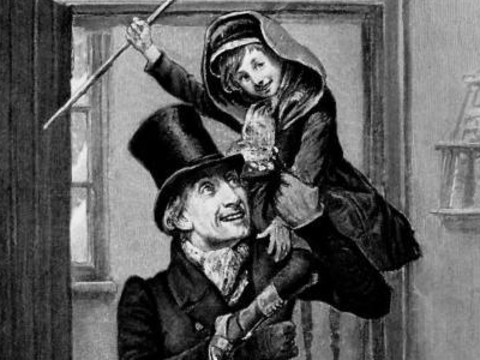 On the other hand, in A Cricket on the Hearth, the characters are often identified by their disability. There is a character in the beginning of the story who is hard of hearing, but is referred to throughout the book as the deaf Stranger. The characters take it upon themselves to shout in his ear, and no one bothers to ask him his name or anything about himself.

Bertha herself is called the Blind Daughter, and Tackleton calls her Poor Idiot (notice they are always capitalized like they are her name) before we eventually learn her name, and even then, the narrator continues to call her Blind Daughter.

Their disabilities become their identities, and people in the story often feel sorry for them, feel that they are less than or broken, and do not know what to do with them. Her father often lies to Bertha to protect her from the harshness of life and their own poor circumstances, as if her blindness makes her too fragile to handle any other harshness in life. In one part of the story, Bertha starts crying, and her father immediately asks if she is crying because of her “Affliction” (yes, with a capital A). This only makes her cry harder and she tells her father,

"I have never felt it!" cried the Blind Daughter. "I have never felt it to its fulness. Never! I have sometimes wished that I could see you, only once, dear father, only for one little minute, that I might see what I treasure up....But I have never had these feelings long. They have passed away and left me tranquil and contented."

This statement, assuring her father that she has never viewed her blindness as an affliction, opens her father’s eyes (see what Charles Dickens did there?) to the truth that her blindness does not make her broken or afflicted, but just as full as life as anyone else. And slowly, her father and other characters begin to see that this is true and enjoy being in Bertha’s company. And they begin to learn about the deaf Stranger and who he really is. 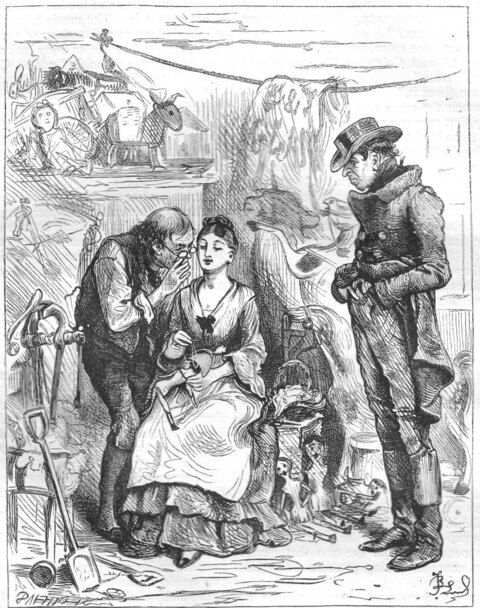 Sometimes we are not sure what to do with people with disabilities or special needs. We don’t always know what to say to them or how to treat them. But Charles Dickens reminds us that they are people just like us, with families they love, dreams and goals, and plenty of things to teach us.

In one poignant passage in A Christmas Carol, we read about a conversation Bob Cratchitt and Mrs. Cratchitt had after Bob and Tiny Tim returned from a church service on Christmas morning.

“And how did Tim behave?” asked Mrs. Cratchitt… “As good as gold,” said Bob, “and better. Somehow he gets thoughtful, sitting by himself so much, and thinks the strangest things you heard. He told me, coming home, that he hoped the people saw him in church, because he was a cripple, and it might be pleasant to them to remember, upon Christmas Day, who made the lame beggars walk, and the blind man see.”

Ebeneezer Scrooge at first only sees Tiny Tim’s disability, but eventually he begins to see past it and see the character of Tiny Tim, and begins to genuinely care about the boy. It seems as if anybody who is around Tiny Tim can find his thoughtful and cheerful spirit contagious if they choose to not focus on the fact he was ‘a cripple’.

And in A Cricket on the Hearth, the main characters begin to see that the deaf Stranger and the Blind Daughter are much more than those labels. They both have names and stories and personalities and things to teach them, and they are happy to embrace them for those things and include them.

Thank you Charles Dickens for teaching us that people are more than their diagnoses or disabilities in these Christmas novellas. In the words of Dickens and Tiny Tim -- words that unite us all, despite our social class, race, gender, or ability -- "God bless us, every one!"