How Comparison Keeps Us From God's Best

We all do it. We compare ourselves to others. We view something someone has or does as better than us. And we feel jealous and insecure. But then we compare ourselves to someone else and we find we're better at something than them, and so we judge them and feel better about ourselves. We're continually trying to keep the scale of comparison balanced at the expense of others and ourselves. But the scale only keeps tipping back and forth. It's exhausting.

But God does not want us to compare ourselves to others. Everyone in the Bible who compared themselves to someone else missed out on what God had for them. 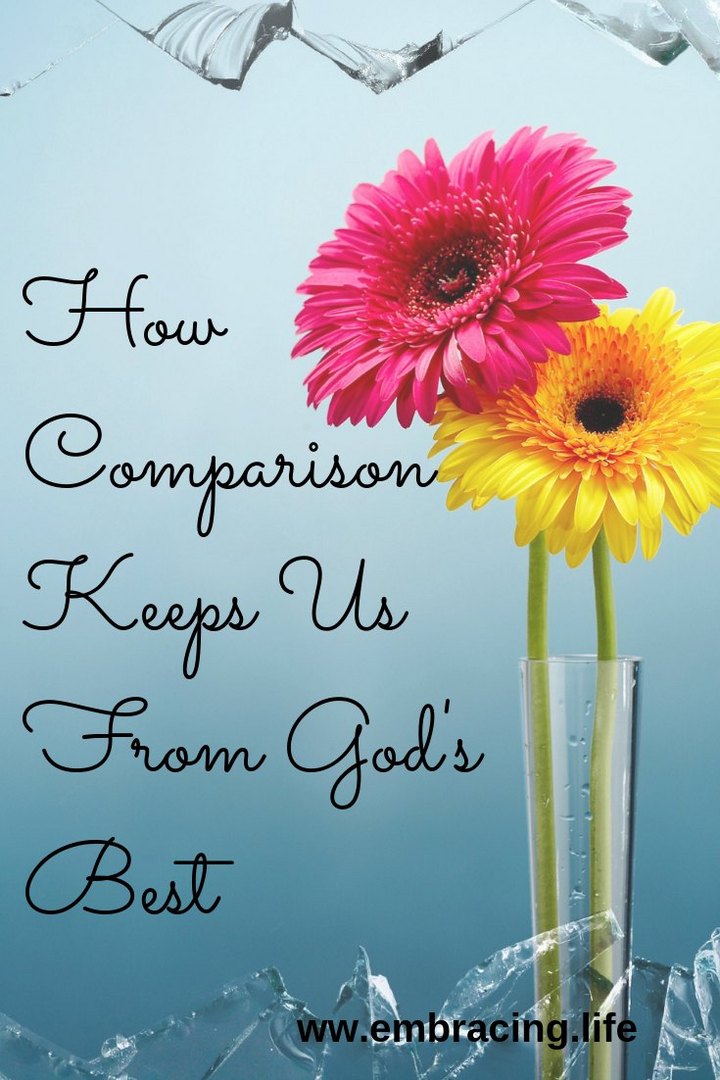 Their story of comparison is found in Numbers 13 and 14. God had finally led them to the edges of their Promised Land after decades of wandering through the desert. He told them to send one representative from each of their 12 tribes to go and explore their Promised Land and bring the report back to the Israelites. He told them it was a land flowing with milk and honey and that they would be able to take possession of it.

So off these 12 spies went. They did indeed see milk and honey. They also saw a cluster of grapes so large they needed two men to carry it Numbers 13:23. They found pomegranates and figs and all kinds of things I'm sure they were ecstatic to eat after decades of eating quail and manna.

But they also saw the people who currently inhabited the land. How fortified their cities were and how much bigger these men were than themselves. And rather than believing God's word that they would take possession of the land, a land flowing with milk and honey, ten of the men instead focused on how they compared to the inhabitants. How likely they were to fail.

These ten men told the Israelites that the Promised Land was terrible and that they were better off going back into slavery in Egypt.

God got mad at the Israelites for not believing Him and Joshua and Caleb. And because they focused on their fear rather than believing God's word, only Joshua and Caleb and those who believed God were able to go into the Promised Land.

Look at all they missed out on because they compared themselves to the occupants of their land. The comparisons weren't accurate. They were greatly exaggerated. And completely ignored what God had told them. And they missed out on the land flowing with milk and honey (and giant grapes!) for the rest of their life.

Decades later, the Israelites were in their Promised Land, but they had (again) disobeyed God's commands and so God allowed the Midianites, a cruel group of people, to oppress them and continually battle with them. The Israelites had to hide from them and were experiencing starvation due to the Midianites taking everything from them. Finally, the Israelites turned to God and begged for mercy.

Enter Gideon, fearfully threshing wheat inside (normally an outdoor task that the wind helped with immensely) and an angel, even more terrifying than the Midianites.

After getting over his terror of seeing the angel, Gideon becomes indignant that the angel would call him a "mighty warrior" Judges 6:12.

He is not convinced he was the man for the job, and tested God not once, but twice to verify that indeed God did want him for the job. (Judges 6:36-40)

Eventually, Gideon stops looking at his weaknesses and he stops comparing himself to others. And he starts believing God's word. Once Gideon focuses on God and God's word, suddenly Gideon has a lot less doubt and insecurity about himself. And he is indeed able to lead the army against the Midianites and defeat them.

If Gideon had never let go of his fear and doubt and comparing himself to others, he never would have been able to do what God called him to do.

We'll end our time reading Galatians 5:26. I never really paid much attention to this verse until I read it in The Message Bible.

"We will not compare ourselves with each other as if one of us were better and another worse. We have far more interesting things to do with our lives. Each of us is an original." Galatians 5:26

What a beautiful reminder that God created each of us uniquely. Because we are unique, it is easy to compare and see differences, but that's not why God made us unique. He gave each of us different traits and personalities and gifts so that we could all fulfill God's purpose for us. So we would all be part of the body of Christ. And comparison only keeps us from fulfilling God's purpose.

Imagine what God's kingdom would look like if we all bravely believed God's purpose for us and we stepped into it bravely!