Seasoning Your Life with Grace and Truth

In John 8 we meet a woman. We don’t know her name or much about her at all, except for her sin. She was caught in adultery, and religious leaders (and probably a crowd interested in seeing a woman stoned) gathered around her, shouting truth at her. “You were caught in adultery. The law of Moses says you should be stoned.”

They had rocks in their hands. Anger and smugness on their faces.

And then Jesus came along. The Pharisees demanded Jesus decide if Moses’ law should be carried out.

Jesus stooped down to write something in the ground. Her life was now in the hands of this man. The Pharisees expected Jesus to back them up, and if He did, her life would end.

“All right,” He finally said, standing again. Her heart plummeted at those words. “But, let the one who has never sinned throw the first stone.”

She held her breath waiting for rocks to fall to the ground, or for the pain of one to be flung at her body. But one by one the stones were dropped and the crowd dispersed.

She looked into His eyes, wondering what He would do. He was the only one qualified to throw a stone and carry out Moses’ law.

“Neither do I condemn you,” He said, compassion etched on His face.

Relief and gratitude flooded through her at such amazing grace. Mercy that she didn’t deserve.

But that wasn’t all. “Go now, and leave your life of sin,” He told her.

His words of truth stung a bit, but reminded her that she could do better. He made it clear that her sin was forgiven, but it didn’t give her permission to continue committing adultery and other sins.

She could move forward in life knowing she had received grace, but walking in the truth that she was called to a life of holiness.

And that right there is just one example of how Jesus was a man of grace and truth. You see it over and over in His conversations with people He had with people. He showed them grace. And He taught them God’s truths and Kingdom principles.

“The Word became flesh and made his dwelling among us. We have seen his glory, the glory of the one and only Son, who came from the Father, full of grace and truth.” John 1:14 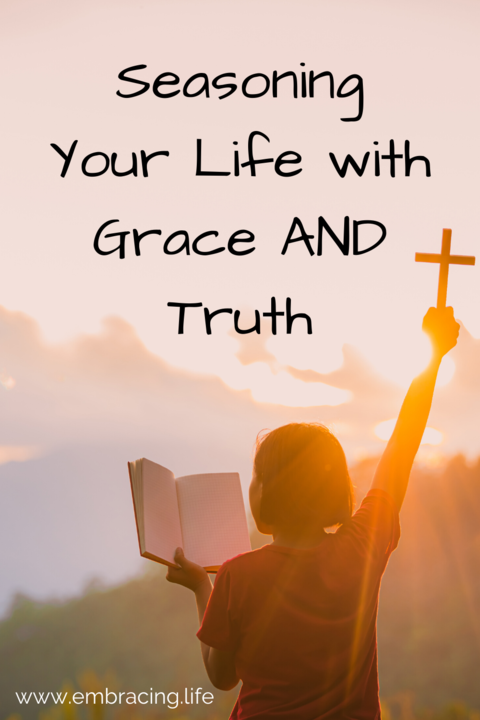 What is grace and truth?

The way God shows us love and mercy, despite all the sin and wrongdoing in our life, was to send His beloved son Jesus to die on the cross for our sin.

“For it is by grace you have been saved, through faith--and this is not from yourselves, it is the gift of God.” Ephesians 2:8

Grace is an essential part of God’s nature. He loves us. It’s just who He is and always will be.

Jesus prayed: “Sanctify them by the truth. Your Word is truth.” John 17:17

Truth is an essential part of God’s character. He cannot lie. He cannot change.

His Word is intended for all of us to grow more and more into the holy men and women He has created us to be.

In our sin and brokenness, we tend toward one or the other.

We compromise God’s truth by choosing to focus solely on grace and God's love and being kind and encouraging to others. Sometimes that leads us to keep silent when we should speak up. Other times it causes us to lie or to omit truth because we want to be nice and be what we think a good Christian looks like.

Or we speak the truth, sometimes brutally so, without any hint of grace and God’s love. We tell people they’re not good enough, that they are failing, that they are sinning and will go to hell, but don’t tell them that God loves them and wants a relationship with them, or that we love them as well.

I know that I myself lean toward being a person of grace and I avoid telling others the truth at times because I want people to like me and I don't want to hurt anybody's feelings. There have been times I have been disobedient to what God is calling me to do or say because I’m afraid of how people will perceive me or worry I’ll rock the boat and cause conflict. But that is not what we are called to do. Nor is it what Jesus modelled for us. He didn’t care what others thought of Him, and He wasn’t always what we would consider nice. But He always showed grace and always shared God’s truths.

Jesus is our perfect example of someone who is able to balance both. He never compromised one over the other for any reason. He simply was a man of grace and truth and so He spoke grace and truth.

Grace without any truth is meaningless. We need truth to become more like Christ. Truth without any grace is just plain mean. We need grace to remember how much we are loved.

The most effective way to be an example of Jesus is to be a model of grace and to be a voice of truth to those around us.

So how do we learn to speak both grace and truth?

"For in Him, you have been enriched in every way--in all your speaking and in all your knowledge." 1 Corinthians 1:5

"Let your conversation be always full of grace, seasoned with salt, so that you may know how to answer everyone." Colossians 4:6

I’d love to know your thoughts on speaking both grace and truth, please share them with us in the comments below!