For as long as I can remember, I have been drawn to Ruth from the Bible. Her devotion to her mother-in-law is inspiring. Her happily ever after is beautiful. But I've been thinking about what qualities I so admire in her. And I think it is simply that she simply put one foot in front of the other, trusting God with everything she did, without expecting a reward. 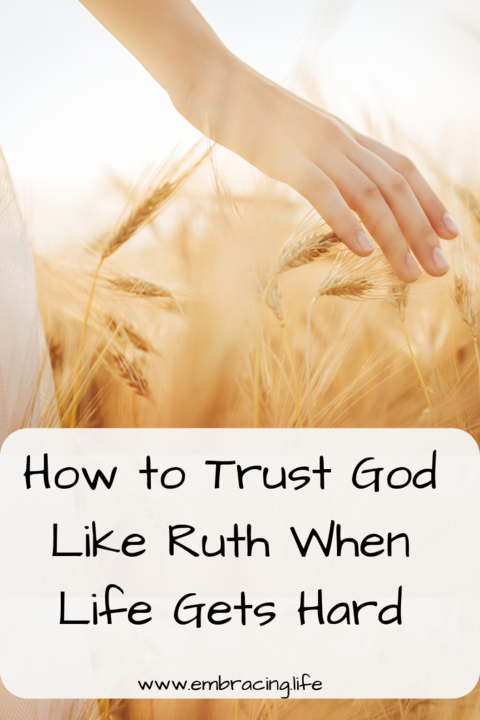 Ruth honored her family and God.

That's it. When her husband died, she could have been consumed by that circumstance. Wallowed in self-pity. Thought the world and God owed her more than she had gotten. She could have gotten stuck in a pit of grief and bitterness like Naomi did. Now I’m sure she grieved. Grief is normal and healthy. Even Jesus experienced grief. Ruth just chose to not get stuck there.

She decides to wipe her tears and embrace the life and the blessings she has.

And she determines to remain true to the family she married into. To follow her mother-in-law, even if it meant leaving behind her biological family and her culture and her friends and the religion she had grown up with and everything that was familiar to her.

And so they journey together. I'm sure it wasn't an easy journey, two women alone without an air-conditioned vehicle to drive in and a GPS. But they put one foot in front of the other and traveled onward.

And when they finally got to their destination, to where Ruth and Naomi felt sure things would get better, Naomi was reminded of all that she had lost. And she became depressed.

Though she was surrounded by grief and experiencing a new way of life in a new land and a new culture, Ruth woke up every morning and diligently went to the fields to provide for the two of them. She worked harder than the other workers, gleaning wheat. She persevered and she maintained a positive attitude and people noticed her character.

Boaz in particular noticed. And that's where the story takes a beautiful turn. One in which Boaz eventually takes Ruth to be his wife. And they have a child together. And you could say they lived happily ever after, but that wasn't the end.

Because I'm positive Ruth kept on keeping on, doing what she did best. She worked hard to provide a clean, happy home for her husband, mother-in-law, and son. She cooked meals and I'm sure lent a hand to those in the community who needed help. That was her spirit, her character, her heart.

We make a big deal about how Ruth was rewarded for her faithfulness by becoming the great-great grandmother of King David, and it is an awesome and amazing thing for sure. But, I don't think she ever got to see that happen in her lifetime. I don't think she got to see all of God's work in her life and her situation, how it resulted in her lineage including King David, and then much later, the Messiah.

But, what I find encouraging about it is simply that all I have to do is keep on keeping on. Keep on taking care of my family. Keep on loving God and being obedient to Him. And something good and beautiful will happen. Now, yes, I want to see it happen in my lifetime. But if it doesn't, I'm learning to be ok with that. Because I know that "He works all things together for those who love Him" Romans 8:28. I've seen Him do it time and again in the Bible. He did for Ruth. He'll do it for me. He'll do it for you. That's just who He is, and I'm glad that His plan and His goal is to "make all things beautiful in its time" Ecclesiastes 3:11.

Wanna learn more about Ruth and how her unstoppable spirit can be applicable to your own life? I highly recommend The 5 Habits of a Woman Who Doesn't Quit by Nicki Koziarz, based on Ruth. 🙂

If you're a fellow special needs parent, I highly encourage you read Trusting God Like Ruth Through The Land of Special Needs Parenting

What do you find admirable about Ruth?