How to be Faithful and Obedient Like Nehemiah and Esther

Esther is one of my favorite heroines in the Bible. And several weeks ago, I was rereading the book of Nehemiah. This time, I couldn't help but see all the similarities between Nehemiah and Esther. How they were in the exact place God needed them to be to do something mighty for Him. How they were able to overcome their fear and face the King. How they faced opposition. And how they were able to do something mighty for God by fasting, praying and being obedient to what they believed God was calling them to do. 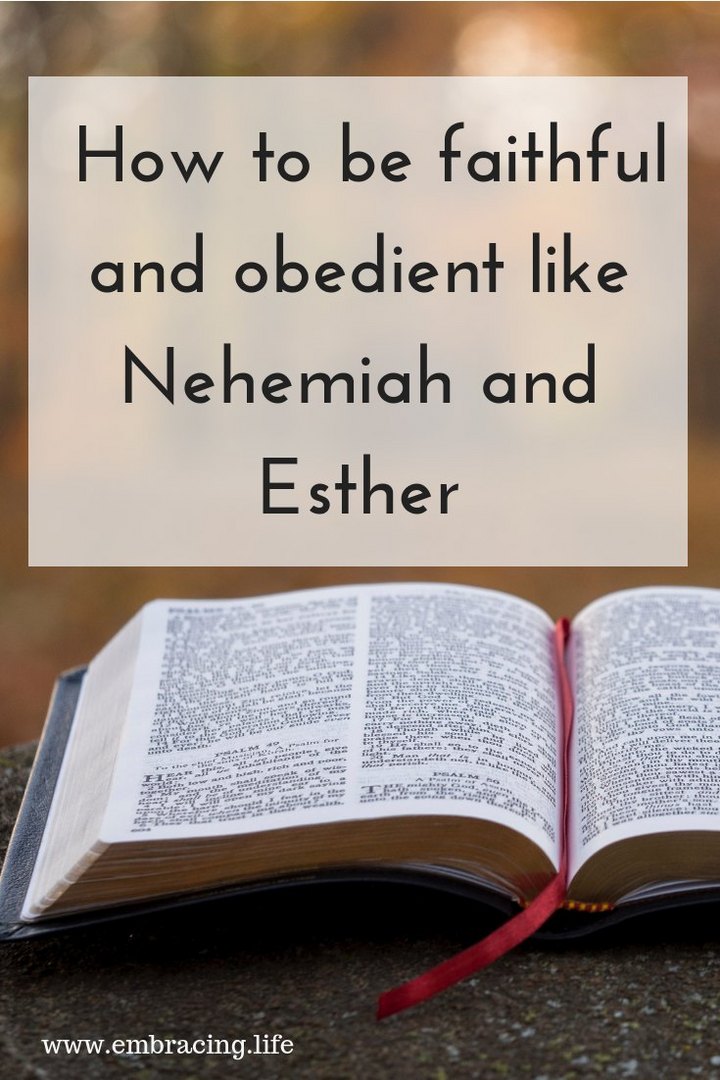 Both Nehemiah and Esther were Jews living in the Persian empire. Both found themselves in the palace of the king, one as the king's wife, and the other as the king's cupbearer. Both were favored, but they had to show utmost respect to the king, to wait until they were summoned to approach the king, and were aware that there could be dire consequences for disobeying or disrespecting the king.

It is in this place, that both are presented with information that greatly impact their Jewish people. For Esther, her people are to be killed. For Nehemiah, the walls around Jerusalem have been destroyed and their temple and their lives are exposed to enemy attacks. Esther and Nehemiah were heartbroken for their people, but they were removed from the situation so that they could choose to say nothing to the king and their Jewish people would suffer and/or die. Or they could risk their lives to potentially save their people. Perhaps they'd been placed in this role for "such a time as this," Esther 4:14

Where has God placed you? What is God calling you to do in that place?

Both Sought God Before They Took Action

Esther was afraid, but declared "I will go to the king, even though it is against the law. And if I perish, I perish," Esther 4:16. She ordered the Jewish people to fast and pray for three days before she sought the king, and that she would be fasting and praying as well. Nehemiah prayed and fasted when he heard the news about the walls of Jerusalem and he specifically prayed "Give your servant success today by granting him favor in the presence of this man [the king]" Nehemiah 1:11. God indeed gave him that favor when Nehemiah approached the king and the king asked him "Why does your face look so sad when you are not ill?" Nehemiah 2:2. Nehemiah felt afraid, but he realized this was an opportunity he did not want to miss out on. So he "prayed to the God of heaven, and I answered the king," Nehemiah 2:4.

Both Nehemiah and Esther prayed before they took action. Both focused on the mighty characteristics of God. Both asked for God's favor to be upon them.

And it happened. Both kings were happy to hear both Nehemiah and Esther share their concerns. Both kings were willing to save the Jewish people in the way that Esther and Nehemiah asked for. The kings trusted them and it is apparent that God's hand was upon them as they speak to the king.

Do you delight in God's name and characteristics when you pray? Do you dedicate what you are doing to God with fasting and prayer?

Both Nehemiah and Esther didn't experience an easy breezy time of making God's plan happen though. Esther had Haman get in the way, determined to kill the Jews and especially her beloved cousin Mordecai. And Nehemiah had Sanballot and his team, eager to destroy the walls as it was being built.

The way to overcome opposition, whether it be people in our lives or insecurities or Satan's lies or circumstances in our lives, is to do what Nehemiah ordered the people rebuilding the wall to do. He told them to pray. And he armed them with a weapon. The builders were to take turns–half would work on the wall, the other half would guard the wall, armed with weapons. (Nehemiah 4:8-9, 16-17). Our weapon is prayer and the Word of God. And it is continuing in action, doing the very thing God has called you to do.

What do you need to do to protect yourself from opposition? How would prayer and fasting help you as you battle opposition and take steps of faith?

Both Experienced Success and Favor

For Esther, success was experienced almost immediately–the king declared that the Jews shouldn't be killed immediately, and it was done. For Nehemiah, it took about two months of hard work, dedication, prayer, and fighting opposition to rebuild the wall. But with God on their side, they were able to do something mighty for God.

Whether our success is immediate or takes years to accomplish, it is an honor and privilege and also requires hard work and dedication to be obedient to God's calling. To step into the role and the place He has called us.

Do you pray that God would be with you and give you success as Esther and Nehemiah did?