How Are You Responding To God's Call?

I'll be honest, I've been struggling quite a bit with obedience. God has called me to do something that terrifies me. And as is often the case, God has brought a few messages to my heart from a passage I've read countless times.

Recently I've been studying a few chapters of Exodus. More specifically Exodus 19-20 and Exodus 32-33. This is when Moses goes up Mount Sinai to meet with God and receive the Ten Commandments. And then while Moses is on Mount Sinai and the Israelites fear Moses isn't returning, they build the golden calf. And I keep rereading this all too familiar passage, with the following questions in mind:

God shows up in Exodus 19 on Mount Sinai. EVERY Israelite in the wilderness saw, heard, and felt the presence of God.

"When the people saw the thunder and lightning and heard the trumpet and saw the mountain in smoke, they trembled with fear." Exodus 20:18

And as if that wasn't powerful enough, every person heard the voice of God speak.  God commands the people to consecrate themselves and for Moses and Aaron to come up the mountain.  He calls them each to do something. But let's see what everyone does: 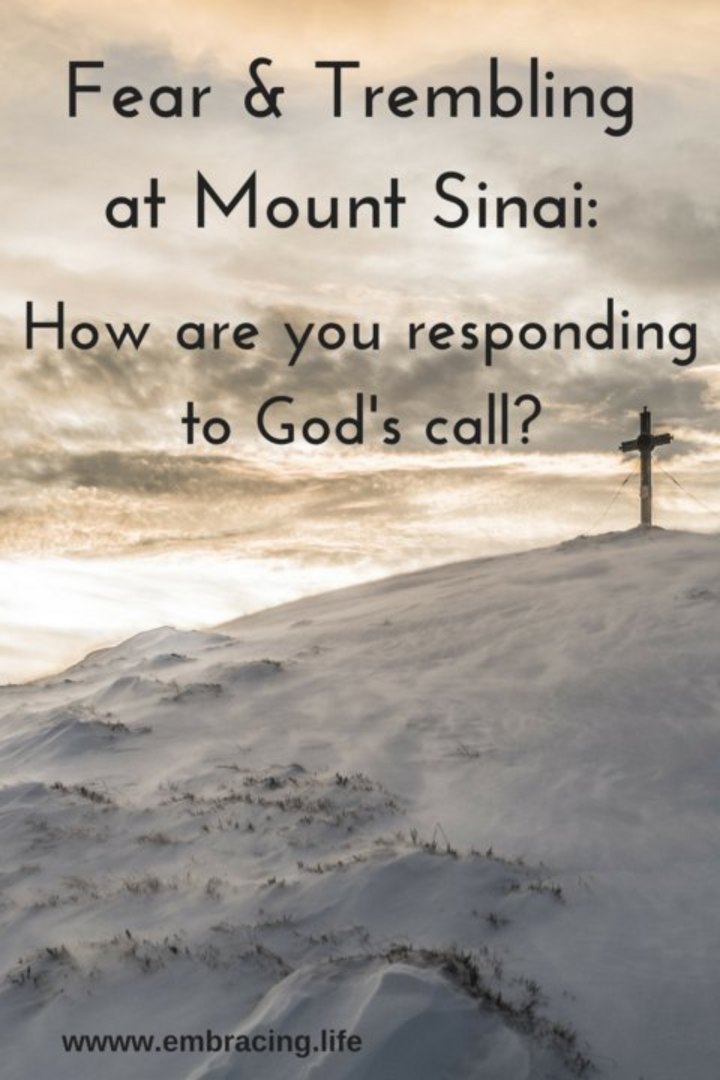 God had appointed Aaron to be their great high priest.  He told Aaron how to build an altar, how to make sacrifices, and not to make or worship idols.

I honestly missed this detail for a long time, but God tells Aaron to come up the mountain with his brother, Moses. And for some reason, Aaron is not there on the mountain. Was he afraid? Disobedient? We don't know why He didn't obey God's command, but He didn't. And since he wasn't where he was supposed to be, he got in trouble. He let the people's fear and demands sway him. Maybe he was a people pleaser. Maybe he was afraid of the people. Maybe he feared his brother was dead and didn't know what else to do. Maybe he simply wanted to disobey God.

I don't know the reason he disobeyed, but we know the Israelites demanded Aaron build them an idol and he didn't say no. He built a golden calf and then went a step above and built the idol an altar. And then rather than repenting or accepting blame for what happened, when Moses returned, he tells Moses

I don't know about you, but the last line makes me smile. The calf just mysteriously emerged from the fire. The only role he indicates he has in its creation was asking for the jewelry and throwing it in the fire and that was simply because the people were evil. Aaron didn't want to tell the people no, so he built an idol and an altar. He didn't want to take responsibility for what happened so he blamed the people and made it seem like a miraculous creation of the idol.

All the people saw the power of God and

"they trembled with fear and they stayed at a distance," Exodus 20:18.

They were told to consecrate themselves, to set themselves apart as holy, but no where in this passage do we see them do that. The Israelites were more than happy to let Moses be the consecrated one, the holy one set apart, they didn't want anything to do with God personally. They were afraid and not ashamed to admit it. And then, when Moses didn't return right away, they then feared he had died. The Israelites now had no way to personally connect with God, no source of hope, and so since they didn't know what else to do, they then demanded Aaron make them an idol. Something less scary than God.

In their fear during these unfolding events, they turned to things that made sense to them. Things that made them feel comfortable. Even though they'd been told only a few chapters before in Exodus 20 to not have idols or altars to anything other than God, here they are asking for, contributing to, and worshiping the golden calf that Aaron makes. The Israelites were then punished for their disobedience--God struck them with a plague Exodus 32:35. As much as we know God loves us and forgives us of our sins, we should also remember that throughout Scripture people were punished for their disobedience. God longs for us to be obedient to His call.

Moses did what God asked, minus bringing Aaron up the mountain with him. He was willing to and probably enjoyed being in God's presence for 40 days. He got to participate in the creation of the covenant between God and the people, establishing order among the people through these laws.  When he returned to camp, he immediately had to set to work to restore things back to God's order. He loved and served God and the people he had been put in charge of, but was willing to put God's ways above what the people might think about him.

He was living out a personal relationship with God, and living out the role and authority God had given him with the people God had given him. And as if that mountain top experience wasn't enough, he made sure to meet daily with God in the Tent of Meeting.  He met with God so often and so intimately that his face was radiant and he had to wear a veil because the people were afraid of its radiance. (Exodus 33-34)

I've read and heard this Mt. Sinai/golden calf story countless times before, but I never noticed one thing. Joshua was part of this scene, mentioned by name multiple times.

"Then Moses set out with Joshua his aide, and Moses went up on the mountain of God." Exodus 24:13.

All of the Israelites had been commanded to consecrate themselves or set themselves apart as holy. Only Joshua consecrated himself, setting himself apart by going with Moses up the mountain, instead of Aaron. He wanted in on the personal relationship with God. He wanted to go where Moses was going. No one knows for sure if he went all the way up the mountain with Moses and also received the ten commandments and other laws with Moses, or if he was somewhere further down the mountain or near its base, more than likely fasting and praying. Either way, we know that for the 40 days Moses was on the mountain, Joshua was so far removed from the Israelites he had no idea they were making and worshiping an idol. (Exodus 32:17-18). Joshua wanted to encounter God.  He wanted to learn what God was telling Moses. And he wanted that relationship to continue. Both he and Moses took turns seeking God in the Tent of Meeting;

"The LORD would speak to Moses face to face, as a man speaks with his friend. Then Moses would return to the camp, but his young aide Joshua son of Nun did not leave the tent." Exodus 33:11

Cool, right? And Joshua was willing to step into the role that God had for him, of leading the Israelites into the Promised Land, but not before defeating their enemies first. Sure there was some fear in his heart, but he was obedient regardless.

"Be strong and courageous, do not be terrified, do not be discouraged, for the LORD your God will go with you wherever you go." Joshua 1:9

Which of these people do you identify with most right now?  Which do you want to be more like?